on March 24, 2014
Wow, is there a broad spectrum here this week.  Bubbles? We got 'em.  Overpriced Chardonnay? Yup.  Gently aged Pinot?  Sure.  Read on - there's something for everyone here.
Cote Mas Crémant de Limoux
This trio of sparkling wines from Cote Mas demonstrates the diversity of Limoux very well. None alike, all unique - and all under $20.  If you went shopping for Valentine's Day Champagne last month and were stunned by sticker shock, have faith - there are plenty of more affordable quality alternatives the world over.  These wines are from the Languedoc region in the south of France and offer something more interesting than what you're probably accustomed to.
Continuing Ed Bunos: Crémant is what the French call sparkling wine that's not from Champagne.  There's Crémant de Bordeaux, Crémant de Jura, Crémant de Bourgogne, etc.  It just means "sparkling wine".  Now you know. 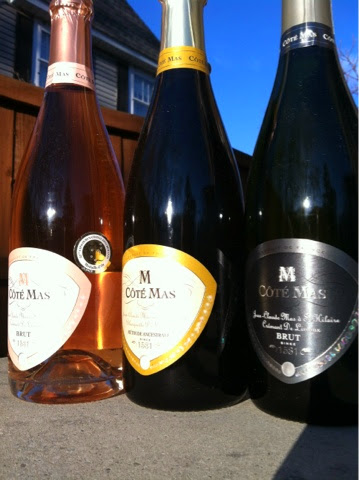 NV Cote Mas Crémant de Limoux Rosé sub-$20 (received as a press sample)
Just barely blush in the glass.  Full-bodied bubbly delivering flavor on par with many still wines. Noteworthy. Favorite of the three.  I would buy this.

NV Cote Mas Blanquette de Limoux sub-$20 (received as a press sample) Huh.  Very different.  The cork was shot (broke on attempting to open and wet at its core), which might explain the funk factor, but maybe not. Strong baked apple streusel flavors accompanied by more than a hint of fermentation gone wild. Honk.

2006 Rochioli Pinot Noir Russian River Valley $50
Granted, this one is closing in on eight years old, but from a nameplate like Rochioli, you'd expect it to have a little more staying power than this.  Not that there's anything wrong with it, but either the years have not been kind or it was never worth close to its price tag.  The $15 Pinot below offers more excitement than this.

2012 Sean Minor Pinot Noir Central Coast $15
More direct, head-on fruit from this Cali Pinot than you shake a stick at.  What's more is that there's spice and grip beyond the intensity of flavor.  Hooray for 2012 and hooray for good Pinot at $15!

2011 50 Harvests Cabernet Napa Valley $50
Channeling the challenges of this vintage, this debut wine from Scotto Cellars bares a striking resemblance to an elegant Chilean Cabernet.  Well made and with substance and character, it still can't shake dominant green vegetable overtones.  Looking forward to trying the next vintage.