NV Rene Barbier Mediterranean White $6 (Received as a press sample)
Redemption!  The first pass at this wine revealed industrial chemicals and soap.  The PR firm representing this producer thought I might've had a bad bottle and sent a replacement.  Good move.  Fresh and lively, if simple, this thirst-quencher has a dash of zip and a finish that has a touch of dry Sherry-like character.  Smoking deal. 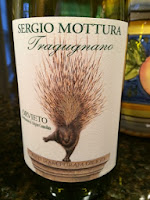 Bright, minerally, and bursting with as much energy as the dancing porcupine on the label.  Perfect wine to welcome the warmer weather with - and enough substance to hold its own with hearty summer fare.

94 points!?  Sure, this is a pleasant, well made, full red with nothing to complain about - and some nice points. But, really, Wine Enthusiast, get real. $15 might be a smoking bargain on the QPR scale, but this won't be coming home with me again.
2008 Santa Rita Carmenere "Medalla Real" $20 (Received as a press sample)
Very, very well made.  Not a drop out of place in this poised, maturing Camenere.  It's got grip, tannins to make a Napa Cab jealous, and blue-core fruit that conjures smiles and another pour.  Pretty terrific.
2011 Tikal Patriota Bonarda/Malbec Medoza $20
This wine was ricking in the 2006 vintage.  2008 and 2009, too.  2011?  Yup. 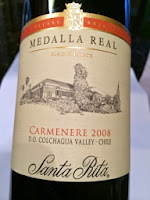