on June 27, 2014
If you've ever been in a foreign place and tasted the food from the land, drunk the wine, and immersed yourself in the essence of the people, then you understand the exhilaration that only travel can deliver. And you've also probably thought, if not said out loud, that if you could bottle that sensation, then you would pay dearly for the pleasure of reproducing it at some point in the future.
Well, what if something was already bottle that could induce that sensation? 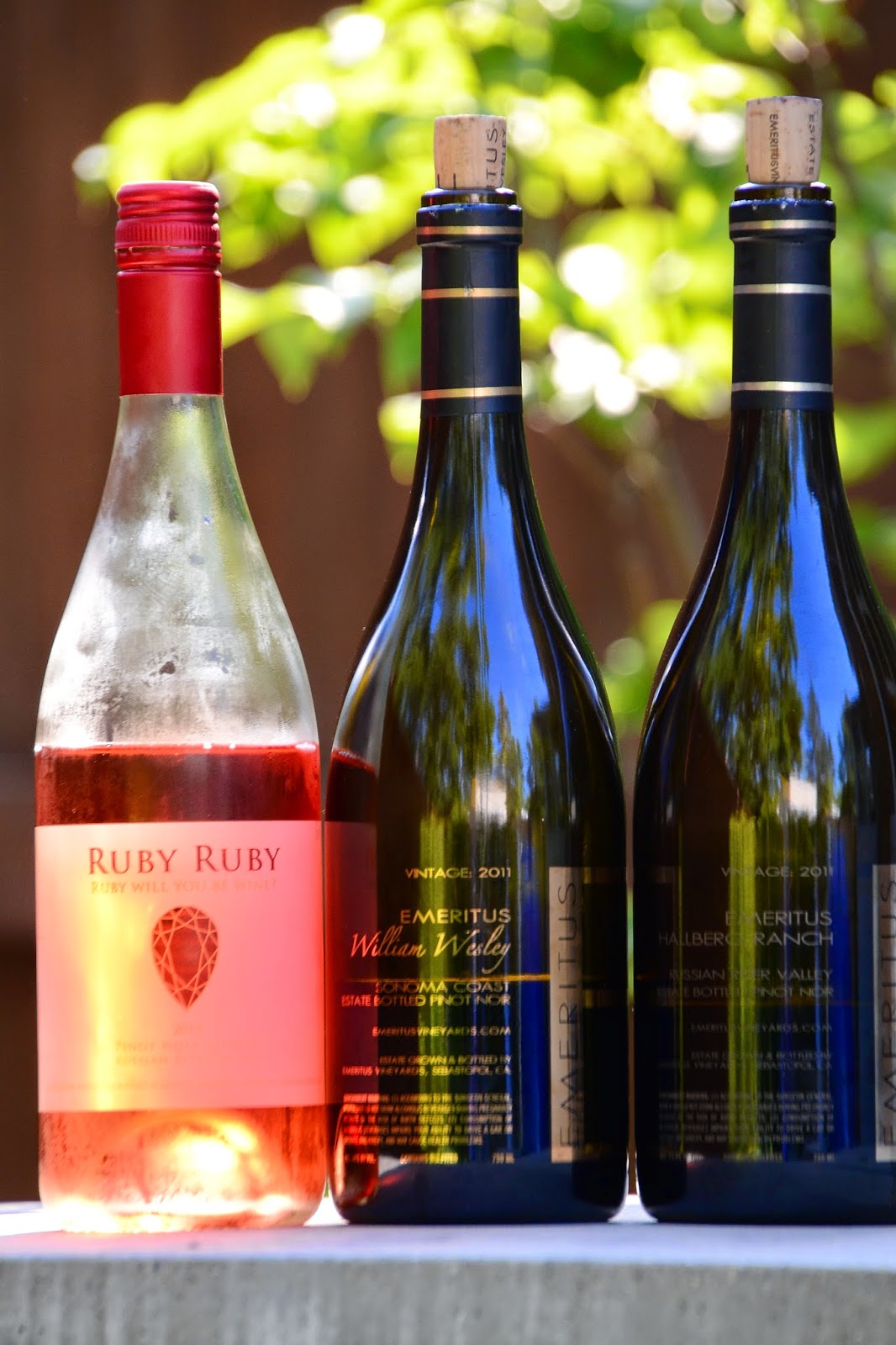 After several years of participating in group tastings (both virtual and in-person), my approach to most carries the baggage of skepticism. Chalk it up to scar tissue, but over-hyped tastings of over-priced wines attended by blindly adoring "critics" fawning over mediocrity is more the rule than the exception.  After all, it's not the winners that need the promotion.  So, one would have ample reason to be dubious of Thursday's tasting: Northern California Pinot Noirs from the 2011 vintage, quite high per-bottle prices, and a vintner with Burgundian tendencies. If ever there was a trifecta for failure, this would be it.
But wonders never cease - and no one is more surprised than I.
The history of Emeritus Vineyards is almost as entertaining as its founder. But, let's look at the present rather than regurgitate the past, for if these bottles are any indication, this is a trend-bucking winemaking operation with a promising future. Some interesting facts that contribute to this:
So?  The wines:

As a blanket statement, these wines are highly atypical - if you're expecting bombastic Sonoma/Russian River Valley extract, these are not it.  While Brice Jones (Emeritus founder) claims that, rather than emulate Burgundy, he's just trying to make the best possible wines from these sites, every winemaker says that.  Besides, his long ties to Burgundy and the influence of Burgundian partners and consultants is immediately evident in the wines.  That's not a bad thing at all, but it certainly makes Emeritus an outlier in these parts.

So, if the wines channel terrain more than grape, value focus and nuance over obviousness, and require a bit of thought to fully appreciate, why did I like them so much?  Because they tickle a different part of my wine-loving soul - one that doesn't get a whole lot of exercise drinking the normal domestic fare.

What does that mean?  Well, the wines are spirited and very well made, and in possession of tons of personality.  In the same way that a great wine you taste while on vacation in wine country stimulates longing deep in the soul, these wines strike a fundamental chord, grabbing the drinker's attention at his or her core.  To say that the Pinots are memorable fails to appreciate that you don't need to take a vacation to travel to whence these wines came.  All you need to do is stick your nose in the glass and let the teleportation commence.  And, while pricey by most standards, these wines are actually worth it.  Again, no one is more surprised than I.

Samples of their Saignée and two Pinots were provided and tasted.

2013 Emeritus Vineyards Saignée "Ruby Ruby" $25
A proper wine with all the right components.  Sophisticated, structured, and clean.  Well made and refreshing, but far from a novelty.

2011 Emeritus Vineyards Pinot Noir Russian River Valley Hallburg Ranch $42
Burgundian is right! Lighter bodied with lacy (as in négligée) acids that make for a classy texture and a bottomless pit of subtle complexities. The finish is long and dizzying.  I'd like to meet this wine in 5 years.  If you're looking for stereotypical Russian River Valley syrup, this is not for you.