Portugal - (A Slice Of) The Lay Of The Land

on June 12, 2014
Understanding the layout of a country or region is often helpful in understanding what types of wine to look for.  But, man, it can be a hell of a bore on paper (yawn.)

Boiling Portugal down to a simple here-there-that, well, it's not so simple.  That hasn't stopped me from translating the kick ass map from the peeps at Wines of Portugal into something overly simplified.  Take a look.  The first is theirs, the second includes my own, um, edits. 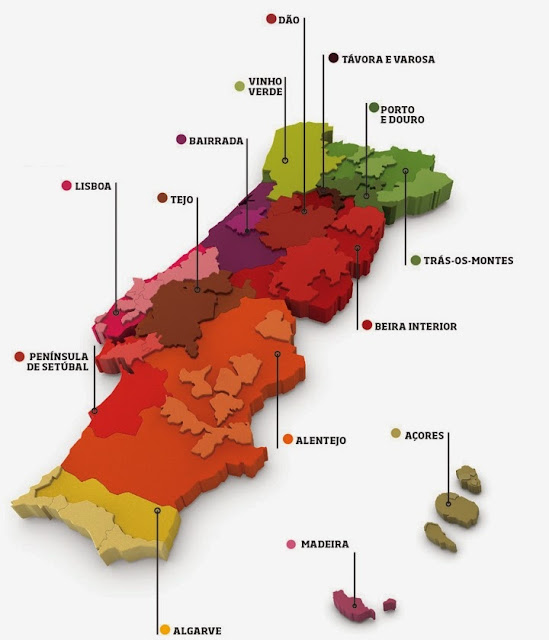 Unless you've got blinders on, two things will strike you about these maps: 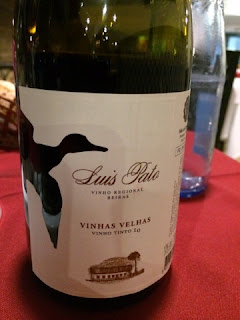 While neither generalization is entirely accurate, there is a little truth in every joke.  More to the point of why you should care; the variety of grapes - some 300 different varieties used in winemaking here - and the uniqueness of microclimates make this - as Pedro the sommelier put it - the most exciting place to be enjoying wine.

So, ready for a deep dive into the subregions of the 14 main Portuguese DOCs?  Sorry to say, my learning of Portuguese wines is still in its infancy and will likely take a (happy) lifetime to emerge into adolescence.  Which makes this a great source for exploration.  Still, I did learn a thing or two while there...

Demand for Port has been decreasing for some time, forcing formerly mostly-port-only houses to branch out and emphasize table wine production.  This translates to some interesting and not altogether fortunate impacts on US consumers:

Of course, that's not all (or nearly the best) Portugal has to offer.  But it is why a lot of their intriguing wines never make it here.  Adding to the woes, the complexity of Portuguese wine is its own marketing enemy.  Start with that daunting 300 variety number and add to it that most wines are made from blends of grapes most of us have never heard of, and you have to educate people before they'll understand or care enough to buy.  And in the business of moving product, educating your consumers is a huge, costly burden that rarely has a positive ROI.  Think of it like this: Napa has Cabernet, Tuscany has Chianti...Portugal?  How about a white made from Cerceal or Arinto and Fernão Pires?  Just kind of rolls of your tongue, doesn't it?  Not.  The upside to this is that Portugal will remain an under-the-radar value for the adventuresome consumer for longer.

So, it's complicated.  But exciting. 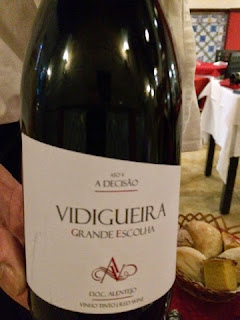 Which brings us back to the people.  And Pedro.  And a story about Pedro and Sergio, which is really about the Portuguese people.

We met Pedro at a restaurant where he's worked for eleven years, four as the sommelier.  In his "I only speak a little" English (which is better than you'll hear spoken at any mall in the Midwest), he explained what the mind-blowing red was that we were drinking: a field blend from the Alentejo subregion of Vidigueira made by a cooperative of growers.  We marveled at the wine (which was being poured by the glass for €4.50) and told him so.  When he returned to check on us, he asked if I'd be interested in meeting his best wine supplier - a guy who handles only small producers.

If I've leaned anything from international travel, it's to accept invitations.

Two afternoons later I found myself in the cramped warehouse space of Decante Vinhos with Sergio Santos surrounded by towers of wines I'd never heard of and jerobams of wines I had.  Sergio is a hell of a nice guy who knows his way around Portuguese wines and the business.  No sooner had I walked in than a bottle was corked and my education of Portugal began in earnest.  Two hours later, the bottle drained and my brain overflowing from newly acquired information, Sergio insisted on driving me back to our apartment (through rush hour traffic). We laughed and argued and told stories about our families the whole way.  As I jumped out of the car he said, "Please call me if I can help with anything while you are here.  Oh, wait!  Did I tell you about the restaurant around the corner that serves the best leitão in Porto?  Wait!  I will write it down for you!"