Maybe It's Time To Rethink Points (A Little)

Earlier this week, the Recycle Bin reviewed two so-called 94 point wines.  Yeah, from time to time I get sucked in by the numbers just like you do.  Each of those wines presented as well-made, if pedestrian and undifferentiated.  Neither was particularly reflective of its origin, and neither was noteworthy for its complexity.  More importantly, neither provided a terribly compelling drinking experience - something which I found to be at odds with a score reserved for outstanding, exceptional wines.

In fairness, tarring their legitimacy by calling them "so-called" is inaccurate.  They are 94 point wines.  At least according to Robert Parker and the Wine Advocate.  There's no taking that away from their producers and marketers.  This is not the first or last time I'll disagree with Mr. Parker's indefatigable palate, but he is no less entitled to his professional perspective than anyone else.

Questioning the relevance of the 100 point scoring system has for years provided cyberspace with almost limitless material for productivity-killing debate recycling.  Whenever writers get bored and lazy, they dust this one off and fire it into the blogosphere.  Its close cousin is the more philosophical and less vitriolic "wine tasting can never be objective" thread.  It's tempting to pluck such low hanging thematic fruit, but you already know how those stories conclude (if at all): point systems are flawed, every critic's taste is different on different days, publications dependent on advertising for revenue are prone to conflicts of interest, and so on.

All of these conclusions are sound, but none do more than wave a caution flag for consumers.  And that is not especially helpful. 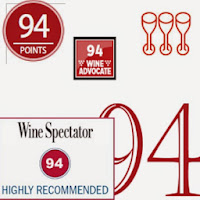 For all the flaws scoring metrics possess (100 points, Tre Bicchieri, Davis 20 point scale, etc.) it's also worth acknowledging that there is tremendous utility in them, too.  Paradoxically, these metrics serve as much as sign posts as they do protective blinders.  Any non-savant drinker simply cannot digest the merits of each of the thousands of labels competing for attention and hard-earned shekels.  So, wines sporting a quantification of their quality helpfully narrow the overwhelming into something more manageable.  Forgetting for a moment how many precious gems are overlooked when looking at shelves through 90-points-or-better glasses, a smaller field dotted with signposts helps consumers navigate what is an increasingly confusing and hype-fueled marketplace.

"Ah...", the wine cognoscenti say, "...but what good is a number if it's so biased, so distorted by personal preference, so riddled with business influence?"  Hell, I'm still shaking my head at how those two wines deserve such high scores, so I get it.  But this tit-for-tat has been played out ad nauseum.  Average consumers have no time or appetite for the vinous subculture's dysfunction - nor do they have patience (quite rightly so) for the suggestion that they need to become more educated to properly enjoy wine.

With so much my-way-or-the-highway rhetoric seemingly intent on annihilating the opposing perspective, is there any chance of finding a peaceful coexistence?  Better yet, is there any hope of quieting this noise that only adds to wine's elitism?

Maybe.  And maybe it's a simple as a collective reshaping of what wine scoring means.  The entire industry could benefit, too.  What would this cool-ade taste like?
"Here's a wine I gave 94 points to because I think it's terrific.  It's not the only wine from this producer and it certainly isn't the only wine from this little corner of the world.  You might like this wine as much as I did.  Whether you did or not, both the winemaker and his/her neighbors are deserving of your attention and exploration.  You will not be disappointed."
Determining what wines we like or don't like, and what wines to buy or avoid, can only be instructed through experience.  Threaded together, these experiences comprise legs of a journey not unlike hiking through a park.  If you can humor the analogy, the idea is that, aside from the occasional "Beware of bears" signs, you're pretty much free to go wherever you please (exploration is encouraged).  The park rangers (critics) provide sign posts along the way to guide you to what are the most popular destinations (high scoring wines).  As you hike along towards one vista or the other, you stumble upon unmarked paths the guidebooks (wine scoring publications) don't tell you about.  As remarkable as your original destination might be, this detour leads to discovery of something previously unknown to you (a wine with no pedigree, score, or San Francisco-based PR firm).  Discovery is exciting - and with wine, how hurt can you really get in the process?

Marketers in every tier rely heavily on points.  Points substitute for time-consuming back stories and  education and tastings.  Despite the efficiency and simplicity of this, a 90+ points-only world would be a more homogeneous, boring world.  If critics and marketers all shifted their mantra to include a simple message, horizons would be broadened while helping shrug-off elitism, reducing confusion and boosting enthusiasm.

Naive?  Hopelessly.  If I've learned anything about the wine business in the last few years it's that reluctance doesn't begin to describe this industry's approach to change.  But when critics begin to champion wines by association, the balance of the business will parlay that into broader, more diverse promotion - something three tier players are already equipped to do and would readily engage in.
100 point system other robert parker