on July 13, 2014
Hello everybody!  This was a week of learning to trust your gut.  As you'll see below, there were some wines that held much promise, but failed to deliver - including two so-called 94 point wines - a strong reminder that one man's 94 pointer is another man's meh.  (And vice versa.)  We start with disillusionment from Portugal (but still holding out hope!), dive into what to Robert Parker considers wines of "...outstanding...of exceptional complexity and character" these days, and round it out with some good values.  Cheers!
2011 Luis Pato Vinho Branvo Beira "Vinhas Velhas" €11 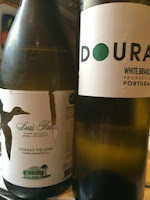 Interesting, but only in a wine geek's way. Very briny and light with faint fruit and an efficient finish. For all the hubbub about this wine both in Portugal and stateside, it's not nearly as enjoyable as you'd think. Perhaps it's over the hill already?

2013 Doural Branco Duoro $8Light bodied and lean with a prominent acidic streak, the fruit on the nose doesn't carry through much to the palate. Thin and quick, this, too, is a largely forgettable wine.
2012 Capcanes Mas Donis Barrica $13 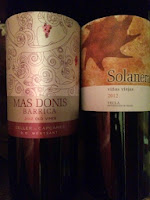 Aromatics are brilliantly perfumed, pretty, and exciting.  There's nothing wrong with this wine, but on the palate it's a bit closed and tannic, and short lived.  Violets and a light herbal tone round out the Mediterranean flavors.  And the action stops there.  A fine (as in okay, nice even), table wine of little distinction.  But I won't buy this wine again (even at $10).  It's just not that compelling.  So...94 points?  Who is Parker kidding?
2012 Bodegas Castano Yecla Solanera $16
Fast, racy, intriguing nose with a dizzying frequency of scents.  Medium-bodied and sharp flavors flanked by prominent acidity and a bit of heat.  Certainly serviceable, but little more than that. Again, 94 points? 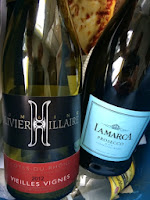 2012 Olivier Hillaire Cote du Rhone $18
This wine has been a real head-turner in vintages past; the 2010 and 2011 were stunners.  But the 2012 was, well, okay.  $18 is a lot for a Cote du Rhone - and the fact that it's being marketed as a declassified Chateauneuf du Pape doesn't sway me from that opinion, either.  Still, this is a producer I always keep an eye out for - and you should, too.


NV La Marca Prosecco $14 (Press sample)
This bubbly has been reviewed here before.  So, is it still as good as it was?  Yes.  And a good reminder that bubbly isn't just for anniversaries and Valentine's Day.

2012 Fontanafredda Lange Rosso Gia (1L) $14
Gotta love the one liter packaging here. It says "family dinner wine", which is exactly what this is. A simple, pleasant, and enjoyable Piedmontese table red. Fresh and lively, it will go with almost anything. Try serving slightly chilled. A good value.