on October 05, 2014
This week we have a tale of three value Pinots.  As we hit the peak of wild salmon season - Coho, Sockeye, and Chinook swimming into grocery stores everywhere - having a solid Pinot or two in reserve is key to make the most of these pink-centric meals.  If you can save a few bucks in the process, then all the better.  So, this week we've got a triad of "affordable" Pinots, which these days means south of the $20 mark. 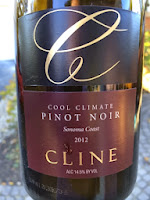 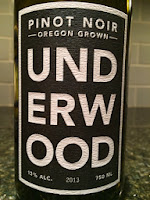 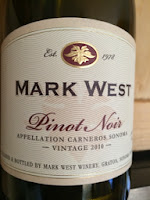 Not sure I buy how much of an influence cool climate had on this particular Pinot Noir, but it's still quite drinkable and enjoyable. Especially for the money. I'd buy this again, for sure.
2013 Underwood Pinot Noir Oregon $14
Leaner, cleaner, and generally lighter than its California counterparts - but no less endowed in the good stuff department. An easy drinking Pinot that scored high on the wallet factor and low on the hit-you-over-the-head scale. This will be coming home again soon.

2010 Mark West Pinot Noir Carneros $17
Not sure why there's any of this left on the shelves (I recommended the 2011 for Thanksgiving last year), but it's wearing its age more than quite nicely.  Thanks to another year in the bottle, this terrific value traded its bombastic, fruit grenade profile in for subtleties typically found in Pinots thrice the price: delicate smoke, hints of tar, and traces of burnt orange.  Yowza.
2010 Mark West Pinot Noir Carneros 2012 Cline Pinot Noir Sonoma Coast 'Cool Climate' 2013 Underwood Pinot Noir Oregon wine review