Happy New Year everyone!  Resolutions?  Not really, but maybe some emerging habits worth focusing on, like sticking to the $12 challenge.  It involves kissing a lot of frogs, but there really is a lot of great wine out there for $12 or under.  Also, getting out of the Chardonnay rut - again, plenty of other terrific whites out there, they just require experimentation.  Finally, is there any enjoyable California Cabernet out there that hasn't been price-hijacked?  These themes and more await in 2015.  In the meantime, some winners and losers of late... 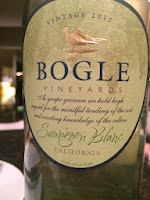 Fresh, vibrant, and lively. What's not to love at this price?  But enjoy on opening, as the next day is loses its sizzle.  Value and drinking pleasure here.
2013 Fattoria del Cerro Chianti Colli Senesi $12
Harmonious, gentle, pleasing, and life-affirming. Love it and love drinking this bright wine.  Case buy that I can no longer keep to myself. 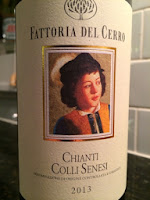 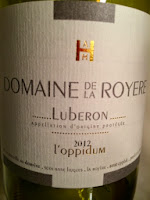 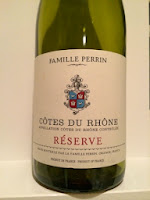 2012 Domaine de la Royere Luberon "l'oppidum" $10
Good on opening, with black, rich fruit. Nothing terribly distinctive, however. A few hours later, though, patience was rewarded - it turned. For the better. Much for the better. At this price, it's on my short list.

2011 Famille Perrin Cotes du Rhone Reserve $12
Fine, but more expensive and forgettable than the exceptional 2010 vintage of the same bottling.
2012 Chateau Pegau Cotes du Rhone $20
Having had such success with inexpensive Cotes du Rhones, I allowed myself to get talked into this pedigreed wine, which I now regret.  Made by the same people behind the celebrated (and prohibitively expensive) Domaine de Pegau Chateauneuf-du-Pape, this CDR was supposedly introduced so that mere mortals could obtain something with "Pegau" on the label.  Maybe they should just stick to CDP.  This overpriced wine is very closed thanks to a tightly wound texture and dominating Syrah character. Almost impossible to enjoy now - even on day three of being open. Probably worth revisiting it a few years to see if it loosens up and sheds it's introversion, but only if someone else is buying. 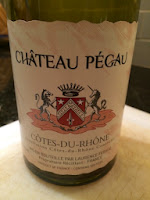