With much of the eastern part of the country in the grips of an unrelenting winter, thoughts of enjoying a refreshing white wine on the deck are almost too distant to grasp.  And so we attempt to comfort ourselves with thick sweaters, dreams of tropics climes, and rich red wines to soothe numb toes.  That's the theme of this week's recycle bin: warming reds that will leave a few extra bucks in your pocket to go towards the vacation fund.

2012 Ca' Momi 'Rosso di Napa' Napa Valley $10
A kitchen sink blend of cab, zin, merlot, and petite sirah.  It's got enough acidity to tip the hat towards the mother country while still packing enough heft to let you know it's from California.  Easy drinking.  Remarkable price - I thought the only thing you could get in Napa for $10 was a jaywalking ticket.
2012 Guenoc Victorian Claret North Coast $10
Rich, dense, and generously oaked, this meaty beast has almost too much brawn, but give it some air to settle down and a heavy beef dish to cozy up to, and you'll be rosy-cheeked and happy before long.
2010 Wellington Merlot Sonoma County $15
As compelling a nose as any Merlot can deliver.  Mid palate is lithe, with a fresh cross stitch of both aquamarine and borderline black fruit. The marathon finish crooks its finger, beckoning you back for another lingering taste. A lot of experience for the buck. Tough to believe this virile wine is over four years old.
2011 Olivier Hillaire Vin de France $10
Wow. Better known for his CDP, Olivier Hilaire is a part time baker, part time winemaker in the Southern Rhone. A general Vin de France blend of Grenache, Carignane, and Syrah, it's  priced at bargain $10 and delivers a surprising amount of depth and rusticity at the price point. Focused, and with nice balance of both fruit and place, I will likely go out and find more of this as soon as possible. 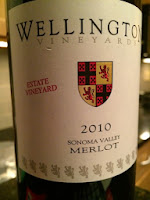 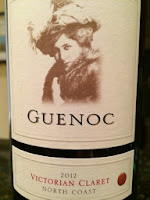 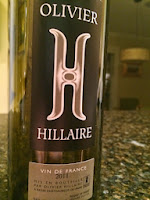