on February 16, 2015
People love to trash-talk the three-tier system (3TS) that controls alcohol sales in the US.  It's a recurring theme in wine writing circles with pretty much everyone saying the same thing ("Death to the 3TS!") And why not?  It's a ripe target with plenty to criticize.

The post-Prohibition laws that preserve distributors' margins and prop up an inefficient industry mandate this: retailers can only buy from in-state wholesalers and consumers can only buy from retailers.  In a time of overnight delivery and one-click purchasing, the model seems quaint and laughable.  Critics of the system complain that the three tier structure is too confining, limiting consumer choice and access to markets for smaller producers.  And these are the least of the complaints.

But as valid as those claims are, maybe there's a reason (besides consistent campaign donations to pretty much every state legislator in the country) why the 3TS survives.  Maybe, just maybe it's more efficient than we want to give it credit for.

This is a tough subject to write about because to really understand it, you've got to walk down some long corridors lined with economic theory.  And who the hell (besides me) likes reading about applied economics?  So, in an effort to make the logic more digestible, two graphics embedded below take a swing at explaining the impact of deregulation on the things we care about most: pricing and product selection.

It's tempting to pluck the low hanging fruit of economic theory.  If you subscribe to this approach, you probably follow these bread crumbs: Deregulation reduces barriers to entry, and invites competition and innovation.  Competition and innovation drive prices down.  The lower the barriers to entry, the broader the product selection.  And you'd probably stop there because that picture looks awfully appealing. 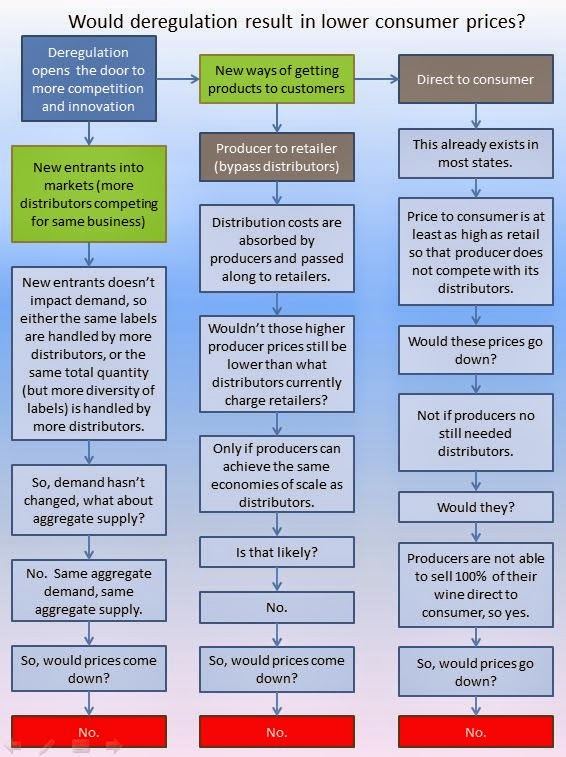 But the real world isn't quite so tidy. In the first flowchart (click for a larger version), take a look at the impact deregulation would have on prices. In the top left corner, we start with two high-level consequences of deregulation: more competition in the distribution tier and new ways of delivering products to consumers. Under the second branch, there's another triage point: bypassing the distributor versus bypassing both distributor and retailer. Just follow the arrows and you'll get the picture.

The second flow chart is organized the same way, but seeks to answer whether deregulation would result in better product selection. 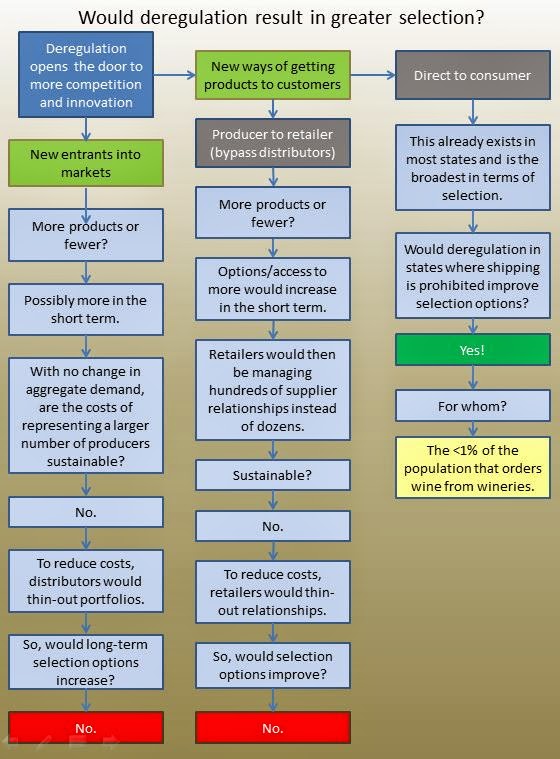 In both cases, the predicted outcomes seem to contradict the trail of bread crumbs described above. What's more is that they support the idea that the 3TS is already incorporating efficiencies of scale. Take it one step further and one could argue that the margins afforded the three tier supply chain actually support broader product selection than a low margin environment would.

Is there still room for improvement and innovation? Of course. And fat margins inhibit any corporation's incentive to innovate. But things are not quite as dire as the vocal minority would have you believe. As with most inequities, what's probably most appropriate isn't a radical abandonment of 3TS for the sake of consumer-friendliness, but a calibration of what's already working.
other three tier system