on March 22, 2016
As we approach the end of the first quarter of 2016 (time flies!), it's time to take inventory of how the drinking year is shaping up.  If the volume (or lack thereof) of posts here is any indication, not so good.

As lamented in the foreboding 2016: State of Affairs in Wine piece, wine isn't getting any better, it's getting worse.  Especially domestically-produced red in the $12-25 price range. While prices have continued to rise, quality - at least as measured by their overextraction, high alcohol, residual sugar, simplicity, viscosity, overmanipulation, clumsy acidity, gloppy fruit, and an overall dumbing down of character and complexity - has dropped like the price of oil.

But is there any evidence to the contrary three months into the year?  No.  Is there any good news?  Yes.

Also as included in that same piece, there is plenty to celebrate coming from Italy and France.  They just keep cranking out food-friendly wines of substantial character and value as they have for centuries.  The dollar continues to remain strong so US consumers are at least somewhat protected from price increases on European wine

Even better is that many smaller producers' wine from older vintages are still available - many on close outs.  There are also pockets of domestic gems from larger producers who continue to do what they do best.  Below are faves of the year thus far.

2010 Monte Antico Rosso Toscana IGT $11
This sangiovese-dominated blend has for years been a Tuscan workhorse.  At five years old, the 2010 continues to pack a punch far beyond what its price would indicate. Somehow there is still plenty of this out in the market, which I would encourage you to seek out and stockpile. This pleasing red is attractive primarily for three qualities: First, and most importantly, it retains an Italian character replete with firm acidity (owing to the sangiovese) that is both charming and food-friendly. Second, despite being a wine to enjoy with the good meal, it is also versatile enough to enjoy simply with conversation thanks to cabernet and merlot to round out its edges. Finally, its price and availability make it accessible to just about everyone.

Normally $20, this baby Barolo epitomizes the marvel of quality old world red. Light in density, but not at all shy in delivering a full spectrum of heady flavors, lip-smacking acidity, and accessible complexity. All of this for under $14! Worthy of a case buy.
2012 Il Castelucio Sangiovese Toscana $9 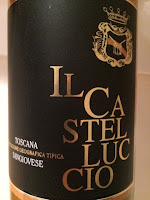 This is a straightforward sangiovese made without fanfare, but with a slight nod towards international palates. Lots of bright bing cherry provides the stuffing and classic Tuscan grip frames it all in. Good out of the gate, it improved markedly on day two.   A sizzling bargain at $8.99.
2008 Rocca di Frasinello Maremma Rosso 'Poggio Alla Guardia' $10 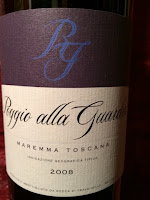 Nearing its eighth birthday, I really hesitated to pick this one up as so few wines have the staying power to last this long. But at a sawbuck, it was an easy flyer to take. Sure am glad, too. Simple on opening, it unwinds nicely with a couple of hours in a decanter. Though perhaps slightly past its prime, this red offers lovely layers of flavor delivered in a supple, graceful manner. Big bang for the buck!

2013 Columbia Crest Merlot Columbia Valley $9
Chocolate never tasted so good in wine. Full-bodied, easy drinking friend ready to accompany any bold fare. Simple, but beoadly appealing, well-made, and a sizzling bargain. Bravo to this company that continues to turn out value after value. 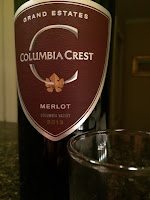 2014 Castle Rock Pinot Noir Willamette Valley $13
It's highly unusual to see a Pinot Noir priced at this low anymore. Even more unusual that it's drinkable, which this is- and then some. Blissfully lacking what has become the typical syrupy nonsense of most entry-level Pinot Noir today, this actually has a bit of structure, restraint, and layered nuance including some smoke and dried citrus rind. Why would I spend more than $20 on a gloppy California alternative when this is so pleasant and inexpensive?
2012 Castle Rock Pinot Noir California Cuvée $9
Even more impressive is the bargain of the year California cuvée. Medium bodied with similar extraction, this wine is simply a joy to drink thanks in no small part two its diminutive price tag. Warm, round cherry fruit is framed by some pleasant acidity and finishes long and creamy. Think California character without the gloppy syrup that is so typical today. When thinking of this in the context of most pinot noir out there )at more than $20), it is mind blowing.  Case buy. At least. 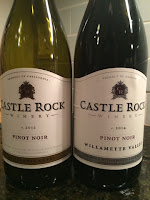