Just In Time For Thanksgiving

on November 08, 2016
Just in time for Thanksgiving comes this four pack of diverse bottles from Terlato Wine's brand quiver.  A pair each from California and Italy, these wines might be on the pricier side of budget drinking, but they don't lack in the quality department.  Note that prices listed are the suggested retail prices that accompanied the samples, so you're likely to find these on the shelf for considerably less. 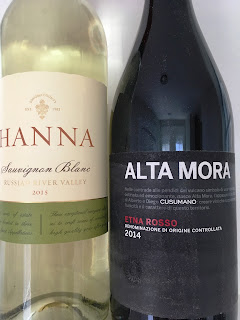 Once upon a time, sauvignon blanc from Northern California had a character all its own. Granny Smith apple and fresh cut grass made for a thirst quenching, refreshing, and delicious combination. All this could be had for under $10 a bottle. Ah, the good all days. Then, a newcomer hit the scene: New Zealand sauv blanc. The electrified grapefruit zing delivered in those bottles indoctrinated the American consumer to a new, exciting (if zany) interpretation of the grape. For some years following (and to a large degree this remains true today) California producers began to imitate the Kiwi style. Though not a throwback to the original California style, this example certainly illustrates a compromise between the two - and to great effect. Impeccably made and hard to put down, this one will find a home at the Thanksgiving table without creating any awkward conversation like uncle Merle does.

2014 Alta Mora Rosso Mt Etna $24
A while back a fellow wine writer declared that nerello mascalese is one of the planet's most overlooked great varieties. Indigenous to Sicily, it is at times compared to Barolo and Burgundy. This example, from vineyards at the foot of Mount Etna, where the soils are rich in volcanic minerals, helps explain that declaration. Braced by lean acidity, this exercise in contrasts packs an awful lot of intrigue into a bottle at this price. Translucent in the glass, but dark and brooding in the mouth, mystery unfolds with a chalky, silky texture. A cerebral experience that doesn't demand analysis so much as beckons the inquisitive palate. 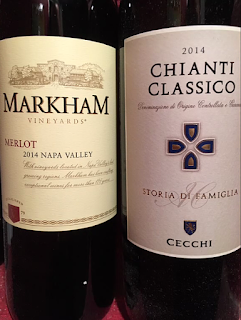 If your palate is conditioned to California reds, then it's easy to forget that there are many delicious wines built on a framework of moderation out there. And this one is a terrific example. With a nose that is super-clean, the light-medium bodied fruit comes across as plump and bright red without being jammy or overbearing. No doubt, this is thanks to lacy acidity characteristic of Chianti Classico. These somewhat contrasting qualities make for beautiful complements and a beverage that is as irresistible with hearty fall party fare as with good conversation.

2014 Markham Merlot Napa $26
With enough tannic energy and proud fruit to satisfy even the most staunch of Cabernet drinkers, this merlot proves a versatile, pleasing drink.  Characteristically Californian, but without being overbearing, the flavor profile in this wine is a pleasing combination of black, blue, and deep red fruits framed nicely by moderate toasted oak, and finishing long with superfine tannins. Would go well with anything from Thanksgiving to Moroccan.