on February 09, 2017
Crocker & Starr is one of those wineries that sits on the edge of the radar for many.  Neither obscure or overtly famous, the times I've crossed paths with the name have all been, curiously, relative their sauvignon blanc.  So, when these four samples, three of which are red, arrived in advance of a virtual tasting, I was intrigued.

The Crocker of Crocker & Starr is Charlie Crocker, a San Francisco businessman who, in 1971, bought a defunct winery.  Napa was mostly farm land back then, so his friends must have thought he was a crack pot.  (Who's laughing now?) For many years he sold grapes from the land to wineries until, in 1997, he brought a young, aspiring winemaker into the fold.  Now in the twentieth year of their partnership, Pam Starr remains at the helm overseeing winemaking of the limited production, sustainably-grown, hand-crafted estate wines.

One of the luxuries of a comparative tasting like this is being able to look for commonalities across the wines.  Experienced, skilled winemakers often impart a unique, detectable thumbprint on all their wines.  Once you zero in on what the thumbprint is, it jumps out at you henceforth.  In the case of these wines, they do indeed come from the same gene pool.  At once iconically Napa Valley and in possession of their own personality, they all share a combination of distinctive perfume and potency.  They are also built to last.  Large and in charge now, the reds in particular will reward the patient collector as the wines' intensity evolves toward grace.  But don't discount the longevity of the sauvignon blanc. While not built for the ages, a few years on its side won't hurt it.

After this experience, perhaps Crocker & Starr belongs closer to your radar's sweep center. 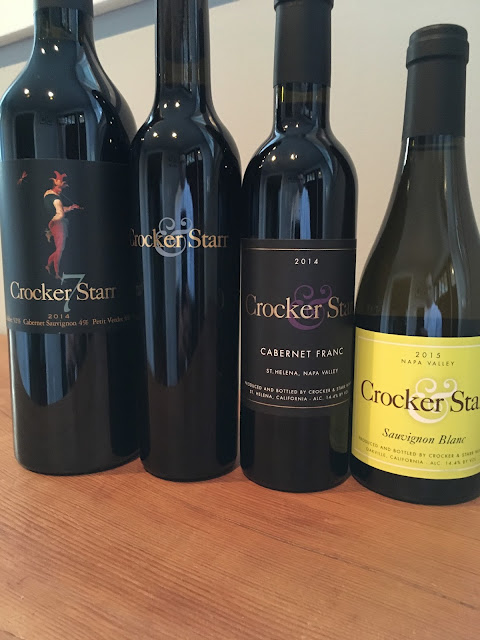 2105 Crocker & Starr Sauvignon Blanc Napa Valley $34
Minerality dominates in this fresh-cut-grass and citrus incarnation of Napa sauvignon blanc.  Vivid clarity and cleanliness of delivery frame the profile, but it's the strong graphite edges outlining the fruit that catapults this from porch quaffer into cerebral geek territory. One pleasant surprise: in contrast to most sauv blancs, Crocker & Starr's becomes more relaxed, creamy, and approachable as it nears room temperature.


2014 Crocker & Starr 'Casali 7' St Helena Napa Valley $80
The first word that comes to mind whenever newly experiencing something is what is most prominent, obvious. In this case that word is perfumed. It's not just aromatic, it's strongly perfumed, making it an attention-commanding beverage right out of the gate. This carries through to the attack where the high-frequency notes arc along the palate. The next word picks up where perfumed leaves off: intense. Here's where malbec makes itself known, busting through the swinging saloon doors like a gunslinger. Though with all of those lofty floral aromatics going on, it's more Annie Oakley than Jesse James. For all its swashbuckling brawn, balance and superfine tannins round out what ultimately becomes an elegant, beguiling wine, most especially on day two when it shrugs off its aggressive intensity. 92% malbec, 4% cabernet sauvignon, 4% petit verdot.

2014 Crocker & Starr Cabernet Franc St Helena Napa Valley $80
Rich nose of lively aromatics lead to an expressive, layering of textured fruit focused on a concentrated core that speaks romance in the shadow of blue neon. Strong, chalky, mouth-coating tannins retain a grip on the honest cabernet franc flavors suggesting that some years of cellaring will benefit this in terrific ways.  As with the Casali, the cab franc mellows a bit after a day while remaining bright, young, and centered on brilliant cobalt fruit. 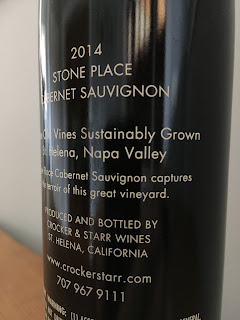