What's In Your Cellar?

on November 15, 2017
The other night some of our favorite neighbors stopped over for an impromptu pre-dinner drink. Suggesting their preference for red wine, I invited the husband to the basement to peruse options in our makeshift cellar (a not so glorified closet that used to house half empty cans of paint). When asked if there was anything in particular they like, his unsurprising response was, “California?” 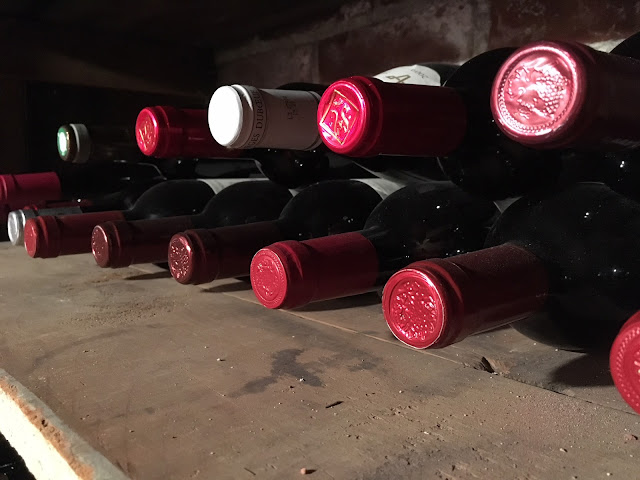 It didn’t occur to me until much later how different the selection is down there than it was even just five years ago. As it turned out that night, we only had a couple of bottles of California red to choose from. Not that ours is a particularly large selection, but that definitely wasn’t the case (pardon the pun) for most of my wine drinking years.

So, (for the voyeuristically inclined) what is down there? More to the point, why?   Because it is loosely organized by region, and easiest to see which shelves have the most bottles, the following are arranged more or less by decreasing quantity:

Port
Without a doubt, the bottles we have the most of are also the ones that have been down there the longest. Ironically, while these wines are perhaps the most loved, they are the ones I have the least opportunity to enjoy. Mostly vintage ports dating back to the mid 1980s, there are also a few oddballs, like a 93 Hungarian Tokaji, an Australian Muscat, and a couple of mediocre bottles of mid-90s Sauternes.  Few wines are as rewarding - and forgiving - when aged.  I look forward to enjoying these over the coming decades.

Europe
Next, it’s probably a tie between France and Italy. The French wines are more or less evenly split between Bordeaux and Rhône/southern France. The longevity of Bordeaux makes it easy to hold onto bottles and revisit them over the years. The freshness and energy (not to mention price tags!) of the southern French wines make them irresistible for the short term, particularly given the back to back fantastic vantages of 2014/15. More than any other region, the Rhône Valley is my go to source these days.

The Italian bottlings are, by number, focused on Piedmont. Nothing outrageous here, just some Nebbiolos, Barbarescos, and a few Barolos waiting for the right time. The others are a random smattering of Montalcinos, Sangioveses, and other blends. As we head into colder months and menus change toward more braised and savory foods, the acidity of these Italian wines are very much prized at our dinner table.

Noticeably absent is Spain.  There are a couple of old school Riojas biding their time, but the overpowering oak regimen currently in vogue on the Iberian peninsula is off-putting to me.  Which is too bad.

Domestic
All but forgotten and sitting in a corner collecting dust is an unopened case of Columbia Crest Gold, a big cabernet franc-based blend that packs a wallop, but will be a magnificent wine in a few more years. At $8.99, I could not help myself from stocking up on this perennial favorite.  I've also got a half case of a California cabernet that I regret buying - it serves as a reminder to enjoy a wine at least twice before stocking up.

That's it for the US?  Pretty much.  What does that tell you about my preferences for domestic wines these days?  They're too much, that's what.

Miscellaneous
There’s a separate shelf for whites randomly filled with some French burgundy bargains, a few South African selections, and one or two bright Italian varieties.   There are a few other odds and ends here and there, including a vertical of Ridge Syrah Lytton Estate running from 1997 to 2002. Why I am still holding onto these I do not know as they are likely well past their prime now. A few bottles of bubbly that have been hanging around waiting for an occasion are getting dustier every month.

I am proud to say that with very few exceptions (such as the ports) the ceiling on what I paid for these wines is $20.  What does your cellar look like? 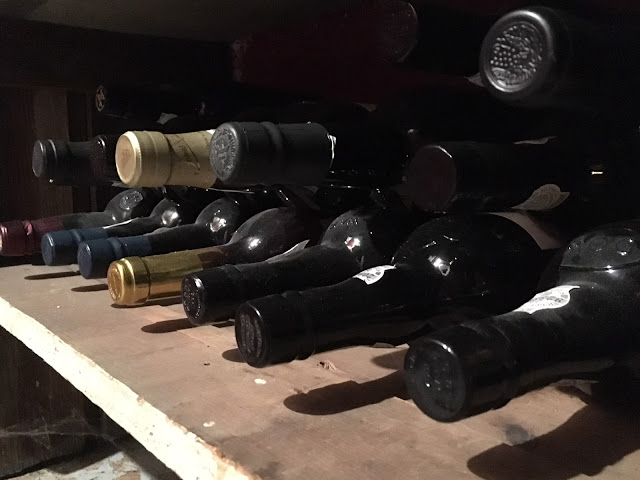