on February 05, 2018
Lodi, is an AVA in California sitting east of San Francisco bay and southeast of Sacramento.  LoCa, as it's sometimes known, has been earning itself a reputation for growing ballsy zin at affordable (by west coast standards) prices.  It has increasingly become sourcing grounds for such value players as Bogle, Cline, Michael David, and others, but value is not the whole play there, as the Lodi Native project proved.

Still, it's a curious effort indeed that Markus Niggli, native of Switzerland and the man behind Borra Vineyards, has released a line of reds only one of which is zin-based.  What's he doing?  Taking a whack at the LoCa mold is my guess.  Unencumbered by a stifling regional rule book, Markus uses a free hand in blending to create age-worthy wines featuring acidity.  That's right, longevity and food-friendliness as priorities is a rare thing indeed - especially in these parts.  Such a different approach accompanied by deft winemaking skills is refreshing.

Though one of sample bottles received was corked (review forthcoming), others proved the importance of suspending judgement.  Though on the pricey side for this area, these are unique, well-made wines worth seeking out. 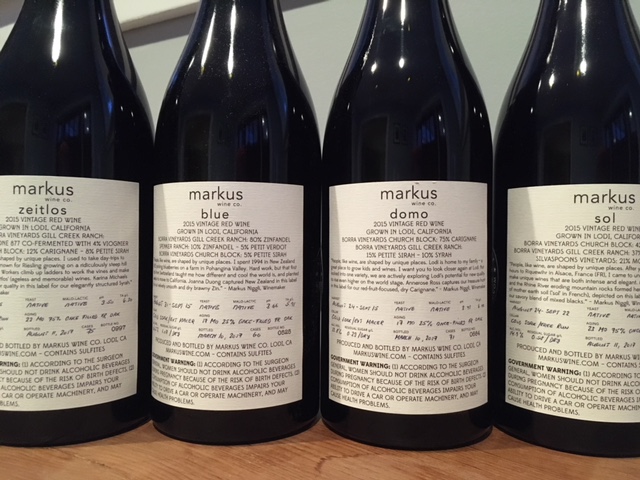 2015 Markus Syrah 'Zeitlos' Lodi $39
Beautiful translucent in the glass. The nose points toward deeply-flavored fruit framed by mystery and intrigue. But the mouth provides tension in juxtaposition. The syrah is savory and succulent, made even more alluring thanks to the accompanying viognier, carignan, and petite. Wines that manage to straddle the sweet/savory make it hard to resist coming back for sip after sip after sip, and this is one of them. Bravo!  (76% Syrah, 12% Carignane, 8% Petite Sirah, 4% Viognier)
2015 Markus 'Sol' Red Wine Lodi $39
Stridently defined by sturdy oak framing and filled in with polished black fruit. Big and angular thanks to the dominant petite sirah, it’s also gushing with finely textured gritty tannins that will appeal broadly. Hard to conceive that this is from Lodi, that’s how well-structured it is. (42% Petite Sirah, 37% Syrah, 21% Mourvèdre)
2015 Markus Zinfandel 'Blue' Lodi $39
Bright zinfandel fruit pops with energy in this deeply-scented and high-toned, swashbuckling beast. Lots of heft and octane delivered in a surprisingly lithe body. Polished and well made. Oh, and the finish? Like a country mile: dust, languid, and enjoyable - as long as you’re not behind the wheel. Whoa!  16.5% ABV (90% Zinfandel, 5% Petit Verdot, 5% Petite Sirah) 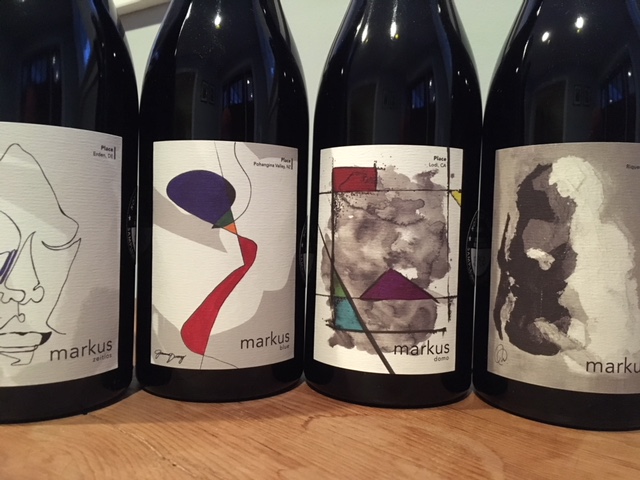