While it’s a little hard to get excited about tasting big boy cabernets on a 92° day, it is an excuse to spend a little subterranean time in a quiet, cool refuge from the heat. Besides, I was delighted to see these samples arrive in advance of a virtual tasting. Last year‘s debut for this Fess Parker-launched brand was nothing short of eye-popping. Can lightning strike twice, this time for the 2015 vintage? Read on to find out. 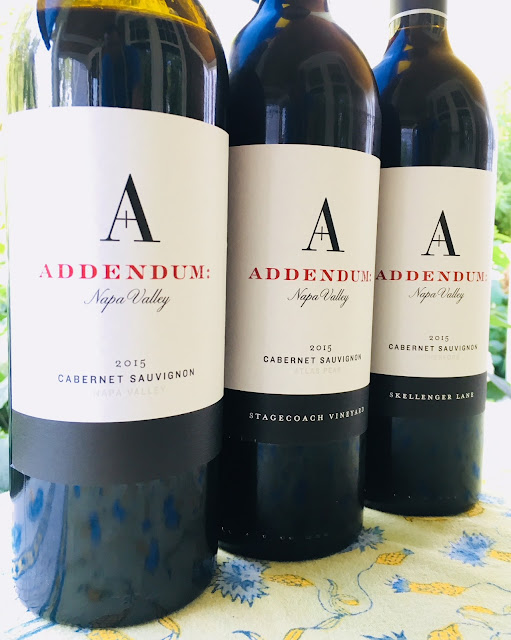 For decades now, Napa Valley has been a revolving door of sorts. Newcomers arrive with naïve notions of winemaking stardom, not unlike young Midwesterners flocking to Los Angeles to pursue an acting career. What Napa newcomers lack in experience, they often attempt to make up for with money. Lots and lots of money. And so goes the joke: if you want to become a millionaire vintner, best to start with tens of millions.

This steady influx of financiers, Silicon Valley magnates, and other well-heeled industrialists have helped keep both property values and, therefore, grape pricing among the highest in the world. So, when the folks at Fess Parker Winery down in Santa Barbara County launched their Napa-based based brand, Addendum, last year, I wondered, “What are they thinking?"  With no land holdings in the area and leases on all the high-quality vineyards mostly spoken for, where did they think they were going to score fruit of high enough quality to differentiate them in a highly saturated market?  Well, I put that question to the winery bosses during a virtual tasting recently. Here's the gist of what they said:

Relationships are important, as are the introductions made by those we've enjoyed mutual respect with for some time, but we are also not some johnny-come-lately....we're bringing experience and professionalism to the table, which makes a difference to the growers we're talking to...and don't underestimate the ability to pay on time. Basically, it's not any one thing, but the combination of a lot of factors that have played to our advantage in getting access to these sites.

OK, that's the grape story, but what about the wines? You can revisit my impressions from the 2014 vintage here, but some categorical observations about these 2015's: First, and perhaps most importantly, these bottlings are not just a tour de force of exceptional talent in the cellar, nor are they simply evidence of careful sourcing, but a brilliant combination of both. The result is cabernets that ooze Napa Valley character, reflect winemaking craft and competence, and pack allure and excitement into the polished package. Finally - and what has me shaking my head at myself - is that these wines are worth every penny of their not inconsiderable price tags - and then some.

In my write up of their inaugural releases I wrote, "These wines will stir a carnal corner of your soul."  This statement remains so with the 2015 (and I cannot recall extolling such flattery on any California wine in year,) leading me to believe that either lightning strikes twice or winemaker Blair Fox has perfected alchemy.  These wines have been made in minuscule quantities, so don't walk, run! 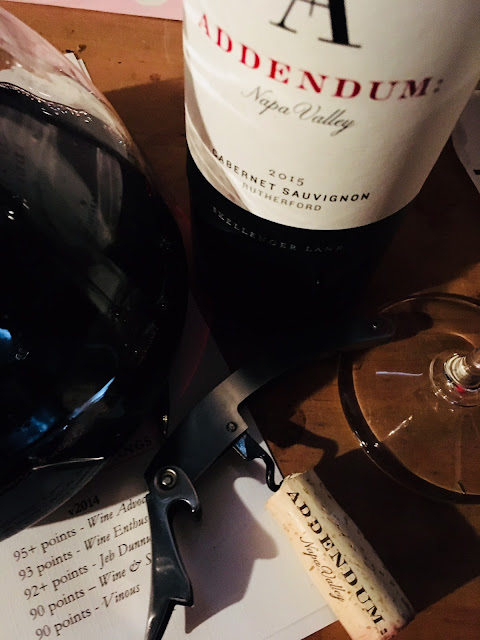 2015 Addendum Cabernet Sauvignon Napa Valley $90
Medium density and color in the glass, but insanely perfumed with aromatics that soar with imagination. Infatuation is instant. (Remember that scene from the movie Jerry Maguire? Where she says, “you had me at hello.” This wine had me at first sniff.) The magic continues into the forepalate where elegance prevails. Dark fruit runs to a deep core framed by ultra finely integrated tannins and a balanced cigar box presence. Two thoughts immediately come to mind: first, this is a wine that has all the stuffing for improvement with cellaring. Second, who's going to have the patience? Voluptuous without being showy, and still so elegant. What a romantic pleasure to drink.

2015 Addendum Cabernet Sauvignon Stagecoach Vineyard Atlas Peak $95
More olfactory sensuality, this time with a warmer, rounder shape to the nose. Expressive and luxurious aromatics, which is exactly how it presents at first taste. A commanding monument of flavor reinforced by mouth-coating tannins and a structure that exudes refinement. Less flowery, but more serious than the Napa Valley bottling. Some wines beg for a good steak, but a good steak will beg for this wine.

2015 Addendum Cabernet Sauvignon Skellenger Lane Vineyard Rutherford  $95
Alluring, spicy aromatics give way to a massive, intense, powerful, and coiled block wall of black fruit and oak framing.  Rigidly structured and tight right now. Not as immediately approachable as the other two wines in this lineup, but I would love to meet this one again in 10 years.
@AddendumByFess @followfess Addendum Wines get