Pinot Noir In The New Millenium: Oregon Is The New California

on August 30, 2018
Once upon a more innocent time, Oregon vintners fancied themselves descendants of the Burgundians, making cool climate pinot noir that strived to be lean, nuanced, and acidic.  Chardonnay was similarly styled, though the better money was in pinot - especially after Sideways.  On a business trip to Portland around Y2K, I stole a half day to check out the Willamette Valley.  Tucked in between intermittent car dealerships and stretches of dusty hills were tasting rooms and wineries unconvincingly proclaiming those Burgundian roots.

On that same visit, I asked a bartender at a local wine bar what value-priced pinot noir he suggest I try.  Whatever it was left me wanting, but when he told me that it was $67 a bottle, I laughed out loud and promptly exited the building.  There was a pious feel to the place, the wines were nothing special, and the prices were every bit as jaw-dropping as Napa - a strange combination for a place desperately trying to get out of California's shadow.

Meanwhile, California pinot was sort of a rebel's folly.  Not much of it was made, except in Santa Barbara county and the Santa Lucia Highlands, places that were (and to some degree still are) backwater hickvilles.  Pinot was hard to farm, difficult to market, and, itself living in the shadow of merlot.  But it tasted unlike any other grape and a lot of what was being made was good.  I remember wondering not only how Oregon was going to compete with California, but why they'd want to. Then came Sideways.

I haven't been back to the Willamette Valley since that trip, so I can't comment on whether it's a more welcoming vibe, but in the spirit of giving credit where credit is due, Oregon winegrowing and winemaking has become more mature and sophisticated, and it shows in the wines.  They're more expressive and appealing, satisfied with their own identity rather than borrowing from European cousins.  The region has earned its success, no longer playing second fiddle to France or California.  If you need proof, just check out how much shelf space is devoted to Oregon pinot vs other places at your local retailer.  It might not be equivalent, but it's probably close.

As the planet warms and tastes evolve, California pinot is now typified by concentrated flavors of candy, cola, and syrup.  Blech!  This is not good, nor is it unique to pinot noir, but at the same time, richness and potency have also moved north into Oregon.  Anymore, Oregon's pinots taste like yesteryear's Californians.  Which make this an interesting time.  At the extreme end of this sits the Wagner family's (Caymus, Belle Glos, and formerly Meiomi) Oregon venture, Elouan, which tastes like a slightly less artifical (but no less antiseptic) version of Meiomi. However, moderacy still exists. 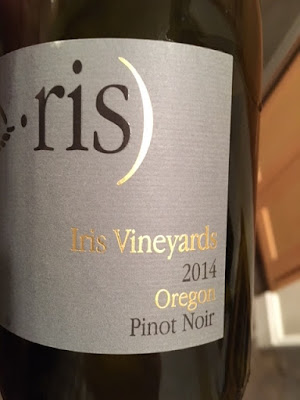 Case in point is the 2014 Iris Pinot Noir Oregon ($20). Iris is over 100 miles south of the Willamette Valley in the foothills of the Oregon Coastal Range. Acidity? Check. Varietal character? Check. Balance? Check, check, and check.  This wine is the whole package without being showy, overt, or expensive.


So, if Oregon is the new California, is California the new Australia?
get iris pinot noir wine review