Catalonia And Its Gems

on September 27, 2019
Catalonia is Spain's northeastern-most state, hugging the Mediterranean to the east and the Pyrenees to the north.  Barcelona, a city that belongs on your bucket list, sits in the middle of Catalonia's coastline.

As a winegrowing region, Catalonia is home to eleven DOs (Spain's version of our AVAs.)  The geography of the state, which is about the size of Maryland, is terrifically diverse.  However, as a whole, Catalonia is virtually synonymous with Cava, the Spanish sparkling wine, almost all of which comes from the Penedès subregion. That leaves 10 other DOs, which certainly make their share of sparklers, but, also as a whole, Catalonia is far from a one trick pony.

This diversity of regions and, consequently, wines, was on full display at the Catalonia Wines USA tasting I attended recently.  The tasting was expertly executed, featuring fifteen different producers from almost all eleven DOs, each struggling for attention while the region itself is also vying for light in Rioja's long shadow. But it's usually in the shadows that discoveries await.

Dani Santacreu, Export Manager for Clos Mont-blanc in the Conca de Barberà DO summed it up well, "It's the beginning for us."  For a winery with a 300 year history, it might seem strange for now to be the beginning, but many of Catalonia's subregions have been organized just in the past couple of decades, and the region has been investing in modernizing equipment and methodology to make the most of its bounty.  Most of the producers I spoke to are also proud of their organic farming practices, which I found refreshing, if not entirely surprising.

Around 75% of wines made in Catalonia are cavas, and a similar proportion of wines being poured at the event reflected this.  Since one could easily spend a week just getting acquainted with this ocean of bubbly, I instead focused on the still wines, many of which are standouts; whites that range from simple, refreshing porch pounders to profound garnacha blanca-based blends with depth and mind-bending complexity. And reds that run the gamut from perfumed, mountain fruit blends heavy on French influence to age worthy cabernets that could rival much of what California has to offer.

One differentiator of these wineries is their use of oak.  In contrast to many bodegas in Rioja, which seem to overdose their wines with American oak, the wines I tasted favored French oak over American, and mostly in restraint. Another big difference in these wines is their price points, some of which are head-shakingly fantastic.  Again, the shadows are where to find the gems, but the injustice of these wines not (yet) having entree into the US market at large is just as mind-boggling as their price points.

It's easy to over do it at a tasting when 45 wines are being poured, which is why focus is key.  I may
have tasted a dozen wines, almost all still, and wish I could have tasted more.  Following are the handful of noteworthy wines that showcase the diversity, quality, and value of Catalonia.  Some of these are available in limited US markets, and I'd recommend looking for them on Wine Searcher.

2018 Mas Llunes Nivia Empordà $21-25
This wine will haunt me.  Made of garnacha blanca (88%) and macabeo, it is profound, full, smartly tailored, and just utterly fantastic.  Far and away the best thing I tasted, I've got a lot more to say about this wine, so stay tuned.

2016 Clos Mont-blanc Xipella Conca de Barberà $15-20
Sensationally aromatic and elegant, this wine can be thoroughly enjoyed through the nose, but why deny yourself the expensive-tasting blend of carignan, cabernet, and syrah? Hard to fathom that a wine of this caliber doesn't cost twice as much. My all around favorite red of the tasting.

2015 Clos Mont-blanc Masia Les Comes Conca de Barberà $36-41
A serious 70/30 cab/merlot blend that will age for decades, but is already showing how this region can compete with heavy-hitters in Bordeaux and Napa.  Deep, tightly-wound black fruit with a thread of cabernet's green-lined fruit.

2018 Costers Del Sio Las Cuadras Tempranillo/Grenache Costers del Segre $18-20
Magnificent texture and with high-toned acidity that makes it a bit jumpy in a youthful way, it is lovely now and should only evolve into elegance.

2016 Costers Del Sio Las Cuadras Crianza Costers del Segre $26-28
Reserved and still hiding its beauty in adolesence, this 70/30 grenache/syrah blend needs a few more years to emerge, but when it does, I'd like to have a bottle or two.  Promising. 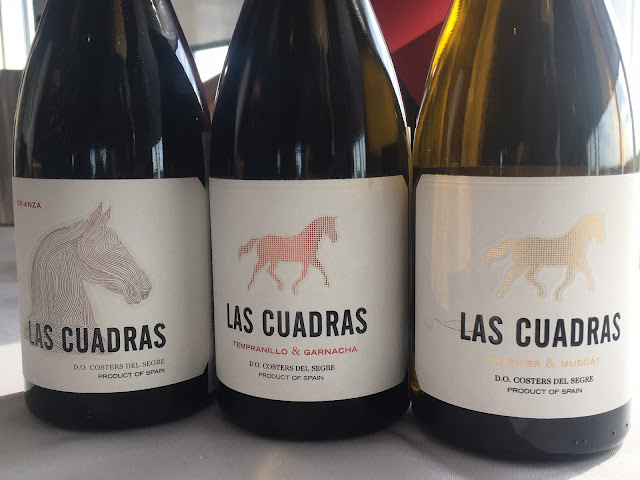