Drinking Joy From An Unexpected Source

on January 21, 2020
Santa Barbara county has become nearly synonymous with pinot noir, and that's not without good reason. The climate lends itself to the variety's want for cool nights and large diurnal swings, and the red grape vineyards have been dominated by pinot since my first trip to the area in the mid 1990s.  Then, of course, Sideways came along in 2004, catapulting the region into tourist-choked fame, and, along with it, the prices of many better pinot noirs into the stratosphere.

Around the same time I was making my first pilgrimage to Santa Barbara wine country, Joel Gott was bottling his first wines. Since then, the brand has grown by leaps and bounds (thanks in large part to its acquisition by TFE), becoming ubiquitous on restaurant wine lists.  The wines tend to be robust in density and flavor, and characteristically Californian.  In other words, little in the way of subtleties and almost certain to garner attention.  That said, I don't think I've ever had a bad wine from them, and have had several that I like just fine.  They're usually priced a few dollars higher than the experience ought to command, which means generally more reasonable than the bulk of California wines today.  But then this wine caught my eye.  It was on sale for a mere $14, so I gave it a spin.

2015 Joel Gott Pinor Noir Santa Barbara $20
The full package: fresh violet aromatics, seamless texture, fantastic fruit, and even some elegant acidity.  It actually tastes like pinot noir, and actually tastes like it's from Santa Barbara county.  With a few years on it now, whatever boisterousness it may have had in its adolescence is giving way to poise. Labeled as 13.6% ABV, and tastes like it, too.  Remarkable.  I'm shocked by how true this wine is.  Which is why I turned right around and picked up a case of it. 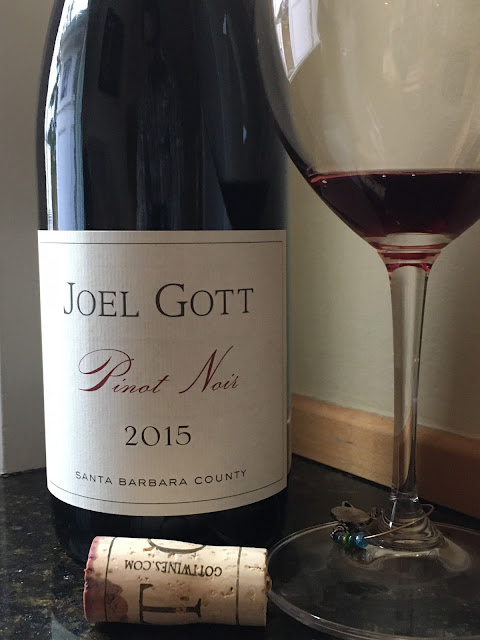