Giddy For Wine In A Box

on July 18, 2020
There is a class of wines that, when described, often has parenthetical qualifiers attached to it. For example, when enjoying a white from that state up north, it wouldn’t be unusual for someone to say that, “it's pretty good (for a Michigan wine)”. But qualifiers aren’t limited to geography. The can include uncommon grape varieties "not bad (for a cinsault)", off-beat vinification methods "tasty (for a sparkling syrah)", and, as is the case with this wine, packaging.
This wine, however, needs no qualifier.  It's a very approachable, mid-level quality cabernet that tastes like cabernet should.  It just happens to be in a box.  A restaurant could easily charge $8 a glass for this as their house pour and sell a ton of it (so long as the clientele can't see where it's coming from.)  The best part is that the 750ml equivalent price of this box is $5/bottle.  Yeah, five bucks.  And it's organic. And if that doesn't make you feel good, check out how much more environmentally efficient transporting boxed wine is (936 liters per pallet vs 504 liters in bottle.) 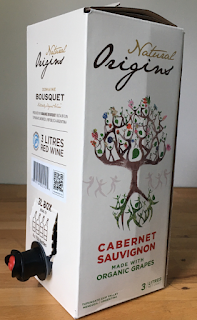 2019 Natural Origins Cabernet Sauvignon Tupungato Mendoza Argentina $20 (3L)
(This is copied verbatim from their spec sheet because it's all you need to know and happens to be right: Intense ruby red color. Fresh and clean with berry aromas and flavors. Medium body.
A week and a half after first tapping this box it shows no signs of degradation whatsoever.  They also make a malbec, packaged the same way...
2019 Natural Origins Malbec Tupungato Mendoza Argentina $20 (3L)
Pleasant and benign without any distinguishing characteristics, which is a good thing considering how wrong inexpensive malbec often goes.  An ever greater crowd-pleaser than the cabernet. Seriously, people, why aren't we drinking more of this?
These were samples, but I'll spend my own money to buy more of this.
natural origins cabernet