Taking Chilean Carmenere To The Next Level

Founded in 1993, TerraNoble was established as a boutique winery specializing in carmenere. So, it should come as no surprise that the focus of a recent virtual tasting was on their camenere bottlings. Presided over by winemaker Marcelo Garcia and US/EU regional director Tomas Uribe Martinez, the Zoom tasting started with a polished video featuring breathtaking drone shots of the vineyards and surrounding areas. If that brief piece of videography was intended to put Chile's wine country on everyone's travel wish list, it succeeded with me.

Side note: these virtual tastings tend to follow a fairly preordained formula that gets boring after a while, but the slide show explaining the evolution of carmenere vinification over the past 25 years revealed something interesting: They clearly recognized that pyrazines can impart undesirable green vegetal notes, just as attempting to mask them with heavy-handed oak can yield its own undesirable consequences.  In other words, the folks at TerraNoble are iterating through successive vintages in pursuit of finding their version of carmenere's perfect identity, one characterized by fresh fruit, tipicity, and acidity.

Each of these bottles was decanted two hours prior to the tasting, offering a riotous explosion of perfumed aromatics that wafted over the table. In the process decanting, the 2017 vintage of the CA1 and CA2 bottlings were notably more dense and inky going into the glass.  A couple of general thoughts on these wines: 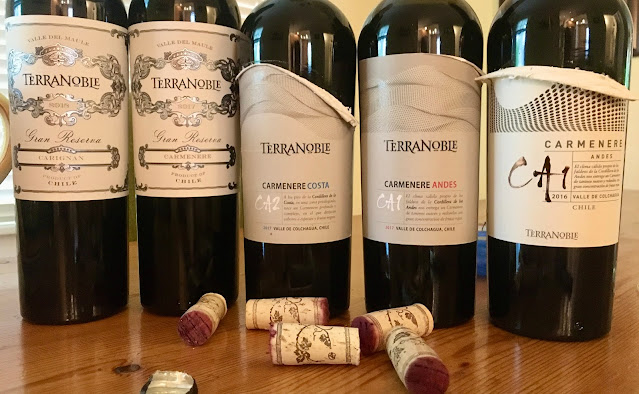 2017 TerraNoble Carmenere Maule Valley Chile 'Gran Reserva' $19 (Sample)
Nearly a decade ago I reviewed the 2008 vintage of this wine. Those notes read, "Dark, tight, tannic, and serious. Seamless texture and expensive feel. Terrific balance. Interesting savory, leathery aromatics. Needs time to relax and deliver its dimensions of flavor. All the good and none of the South American green pepper, vegetal sting." Fast forward to 2017 and the feel is more accessible, with a welcoming, round nose and a subtle tar.  The profile is dominated by black fruit and framed by elegant acidity and a sharpened pencil-graphite edge. Still has the lovely savory elements and expensive feel. Think grilled steak or lamb. More than fairly priced. Best overall of tasting.

2016 TerraNoble Carmenere Colchagua Valley Chile 'CA1 Andes' $25 (Sample)
Thrill ride of a nose with exciting spices and pretty floral fragrance that gives way to a sprightly, somewhat hot palate. Oak toast is front and center ahead of the bright red fruit.  But, wait; that barrel prominence relaxes over several hours, giving way to a refined opulence surrounded by a spaciousness that will have you wondering what else might lay ahead for this complicated, evolving wine. Most ethereal of tasting.

2017 TerraNoble Carmenere Colchagua Valley Chile 'CA1 Andes' $25 (Sample)
The inky color belies what awaits. The oak regimen was dialed down from last year and to great effect, allowing freshness and terrior to take center stage.  Pyrazines are evident, but in a complementary way and in balance with fruit that is prettier and more expressive than the prior vintage allowed. Texture is so supple and winemaking precision is on full display here. A lovely wine I wouldn't have expected to enjoy so much.  Most sophisticated of tasting.

2017 TerraNoble Carmenere Colchagua Valley Chile 'CA2 Costa' $25 (Sample)
As the name implies, this wine is from a vineyard 60km towards the coast from where the CA1 is grown. Once again the color and density would suggest a wine of heft and intensity, while the green vegetable and herbed aromatics offer a contrasting clue as to what will follow.  Turns out neither of these clues is misleading. On the palate, the pyrazine volume level is cranked up, but also matched by the size of the firm fruit. Big, but poised and in possession of a full spectrum of complex crushed flowers and herbs, and even a subtle mountainside smoke. Would love to meet this wine again in five years.