Any longtime Ohioan will tell you that it goes against our grain to admit any flattery to our rival state to the north. But when the whiskey of the north proves to be of more than respectable quality, you've just got give credit where credit is due.

Traverse City Whiskey Co has been making bourbons and other whiskeys since its opening in 2014, though the recipe and techniques underlying their distilling process can be traced back to co-founder Chris Fredrickson's great-grandfather who patented them during prohibition. TCWC bottles five different whiskeys, three of which I had a chance to review and enjoy. In addition to these, they bottle a rye and a port barrel-finished bourbon, both of which sound very yummy. These samples also arrived with a jar of the region's famous cherries, prepped for cocktail making.

Quick confession: that jar of cherries was too much to resist. In fact, it was half empty before I cracked the first of the whiskeys. Deep, dark (almost black) violet in color and soaked in a viscous bourbon-based syrup, having one is easy, but having just one is impossible. You've been warned. 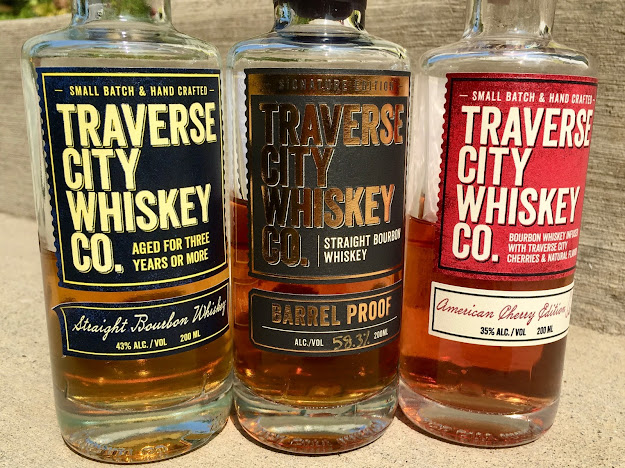 Traverse City Whiskey Co Straight Bourbon $33/43% abv (Sample)
Relaxation in a bottle. Super clean nose showcasing the 25% rye in the mashbill and a round, vanilla-laced shape no doubt thanks to being in the barrel for three or more years. All those same qualities carry through the the palate, which is illuminated by bright acidity and a languid finish. Think sitting in an Adirondack on the dock watching the sunset while on vacation. This bourbon is unstitched and laid back. Sip and chill.

Traverse City Whiskey Co Barrel Proof Bourbon $79/58.3% abv (Sample)
This is next level. With a depth and sophistication that builds on its younger sibling, this slightly more corn-forward bourbon is a few shades darker and much more seductive on the nose thanks to its four-plus years in barrel. Hiding its strength well, it hits its deep notes with rich baritone and its high notes with aching clarity. Oh, so good.

Traverse City Whiskey Co American Cherry $30/35% abv (Sample)
Cherry? Yes, cherry. Stick your nose into a tumbler of this stuff and you’ll think you just opened a jar of maraschinos, but the similarities end there. Instead, the flavors are dominated by textbook quality bourbon framed delicately with a dark sour cherry fusion. If it were the other way around (as I had sort of dreaded) the result would not be nearly as drinkable. Using the same mashbill as the straight bourbon, plus a boat load of Montmorency cherries, this is surprisingly clean, light, and dry. And sip after sip, all I could think was what a kick-ass Manhattan this would make. 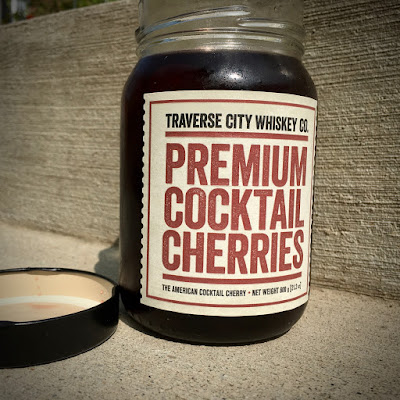