on January 12, 2021
The savvy readers among you may have taken note of the high praise for Xicaru Mezcal Reposado last month. Buoyed with enthusiasm, I reached out to Chris Hampson, one of the partners behind Xicaru, the enterprise that produces, among other mezcals, that special reposado. Chris was kind enough to send samples of their other bottlings, the reviews for which will be forthcoming. In the meantime, considering that we may be on the cusp of mezcal being the next "it" thing in spirits, a primer on what it is and how it is made might be in order. 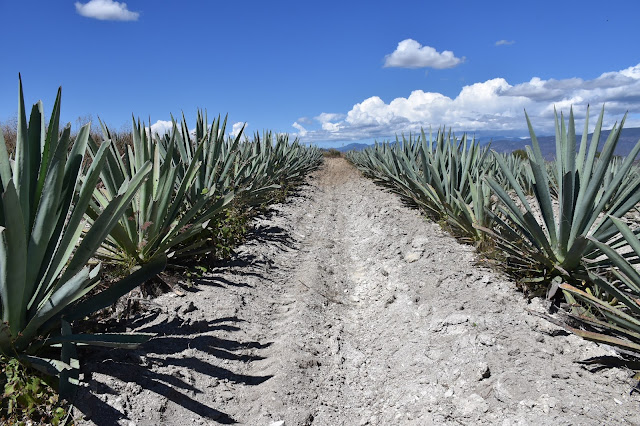 A couple of quick editorial notes: It's been a long time since I've gotten off a call so thirsty and excited to taste through a series of samples. Also, it's a first for me: writing a piece that strings together a horse-drawn stone wheel, subterranean fires, and whole dressed raw chickens hung sacrificially in a copper still.

On a recent Zoom call, Chris gave me exactly the mezcal 101 course I was hoping for, started with a blanket disclaimer: "If you ask 10 people any question about Mezcal, you're likely to get 10 different answers, all of which are right." Like family recipes handed down through generations, there are many nuances to how it's made, and where and what goes into it.

Where & What
The vast majority of Mezcal is made in the southern Mexican state of Oaxaca, an area characterized by its contrasting poverty and incredible natural beauty. As mezcal's popularity gains more of a following in the United States, there is hope and potential for that growth to translate into much-needed commerce coming back to help the local population.

As far as what goes into it, perhaps one helpful place to start would be in also distinguishing it from tequila. Maguey (also known as agave) is the genus of succulent plants that is parent to the Weber's Blue species. If you've ever had a hangover after a night of tequila shots, it's the Blue you have to thank, as it is what goes into tequilas. But there are many species of Maguey, much like there are many varieties of grapes that in turn yield many different wines. The rules governing the making of mezcal allow for the use of any different species of maguey (including Weber Blue), though just a handful make it to the US. All of Xicaru's mezcals (and in fact most of the mezcals imported to the US) are made from espadin, a tall, spiked plant that attains ideal maturity at around 8 years of growth. 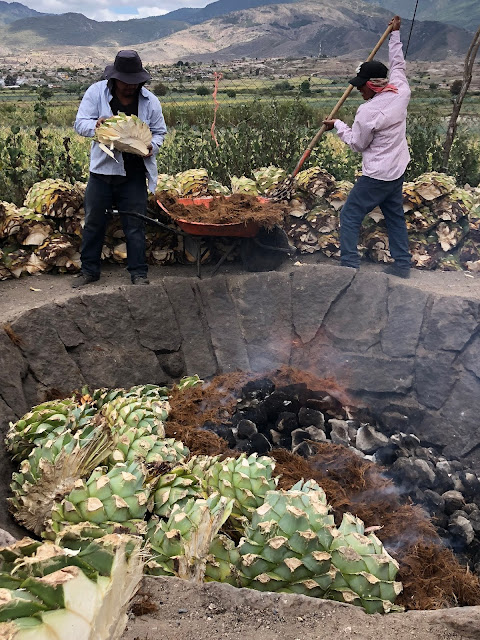 How
When it's time to make a new batch, harvesters go out into the high altitude fields where the espadin grown, cut all those long spears off, and decapitate the core of the plant known as the piña. Very much resembling oversized pineapples, the piñas are then collected, quartered, and set atop a fire of dried mesquite and ocote pine, a local species loaded with sap that imparts a contrasting flavor to the mellow mesquite. This fire is set in a conical pit about 4 feet deep, 15 feet across, and lined with river stones. After the piñas are piled on top of the embers, tarps cover the pit, which in turn is buried in sand.

If this all sounds and looks rather primitive, it is. (And we haven't even gotten to the horse yet!) But this is also where the magic happens. The types of wood used in the fire are as influential as the plants themselves. It takes around four days to roast the fruit, and when it's done, the cooked piñas are loaded into an oversized concrete plate over which a horse-pulled stone wheel called a tahona mashes the maguey into a sweet, fibrous paste to help release the caramelized sugars inside the charred remains. 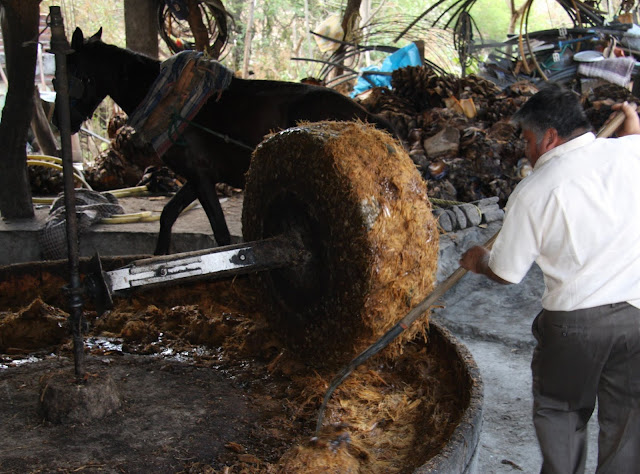 This muddy stuff is then loaded with well water into pine fermenting vats where it bubbles for four days as the sugar from the espadin combines with natural yeasts to create the chemical reaction that results in the manufacture of alcohol. Once the fermentation is complete, the thick soup is dropped into the copper alembic stills for the first of two round-the-clock distillations. At the conclusion of the first distillation, the solids are strained off to be reused in the fire pit and what remains are distilled once more. 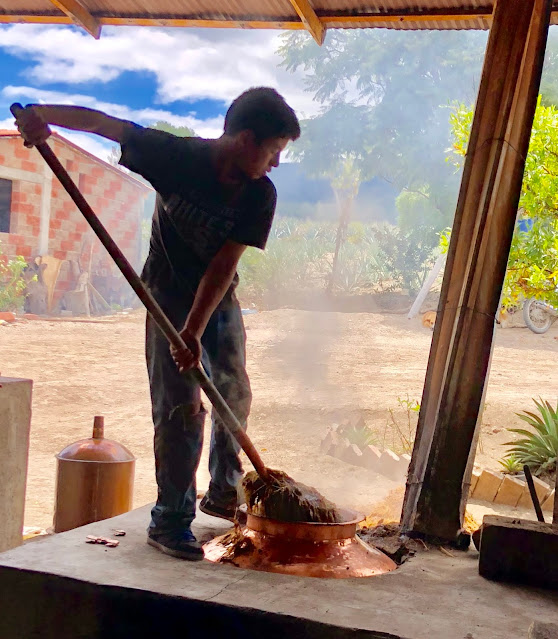 For Xicaru, all of their mezcals start this way. Their 102 proof joven is distilled differently, with more heart* for greater flavor extraction, whereas the lower octane joven is either bottled at 81 proof or loaded into used American oak barrels to become reposado or añejo, depending on time in barrel. (*Check out this terrific explanation of what heads, hearts, and tails mean in the distillation process.)

Do The Funky Chicken
More specifics on each of these as we get to the reviews in the weeks ahead, but there's a particular, unexpected twist to their lineup of bottles: the pechuga. Meaning "breast "in Spanish, the pechuga refers to chicken. Typically designated for special occasions, pechuga is a type of mezcal that is distilled with a raw chicken hanging above the mash, though Xicaru's process calls for adding the chickens right into the distillate. During the distillation process, the liquid mixes with the proteins to extract and impart even more complexity of flavors. But makers of this special kind of mezcal don't necessarily adhere to the one chicken rule, or chicken at all for that matter. With protein being the centerpiece, sometimes rabbits, turkey, or other sources are used depending on availability. Seriously, you can't make this stuff up! 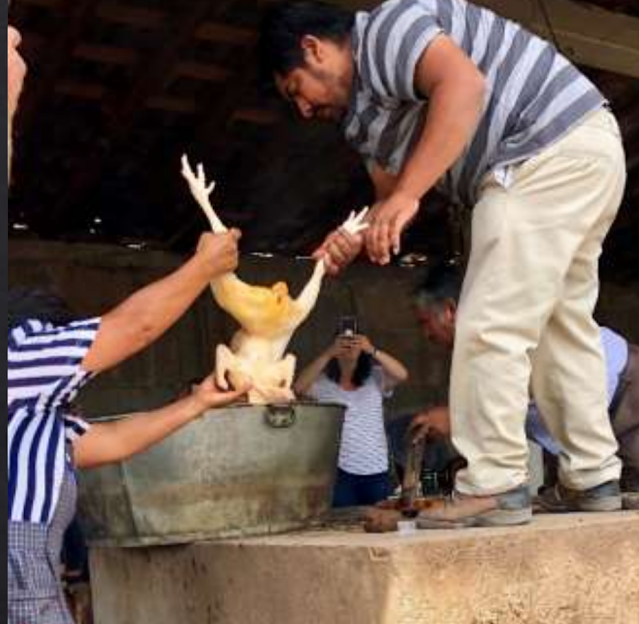 With two partners in the US handling marketing and sales, and the third founder's family, the Santibañezes, making all the wizardry happen down in Oaxaca, this palenque emphasizes balance above all such that no single attribute dominates its mezcals. If the reposado tasted last month is any kind of a preview, I can't wait to taste the others. 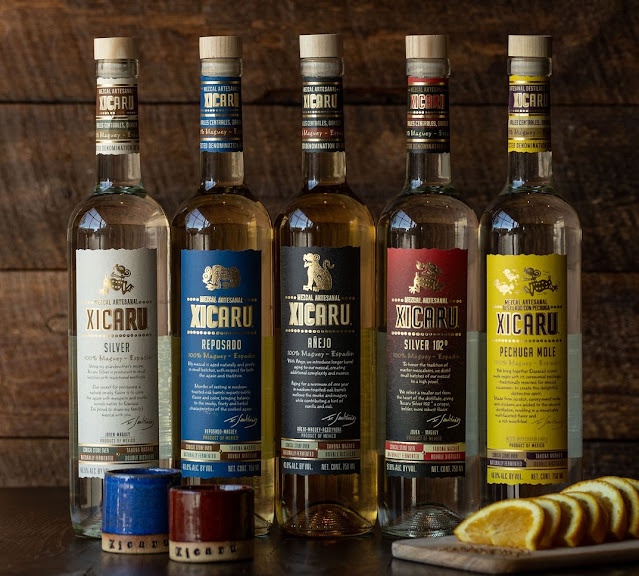