Collin McConville is the head distiller at Rootstock Cider and Spirits, and he's onto something. More accurately, he's been onto something for a while now. Rootstock is the cider and spirits arm of DeFisher Fruit Farms, a 5th generation, family-owned farm in Williamson, NY, about a half an hour east of Rochester and a ten minute drive from the shores of Lake Ontario.

Collin's been there since the distillery opened about a decade ago, converting apples, pears, plums, and cherries into vodkas, brandies, and, among other products, Apple Jack. For the uninitiated, Roostock makes their Apple Jack in the French apple brandy tradition of Calvados by distilling apple cider that has been fermented dry (little to no residual sugar) and then aging the spirit in bourbon barrels. The sample reviewed below is Rootstock's 5 year Apple Jack. And while there are dozens of apple varieties grown on the farm, Collin prefers using apples with more prominent esters for this barrel-aged brandy.

If you're the type of imbiber who enjoys discovery of out-of-the-ordinary beverages, this is sure to press your pleasure buttons.

Rootstock Spirits AppleJack 5 Year $60
The color of a young scotch, its nose is clean and sophisticated, with more than just a passing similarity to French brandy. The likeness continues on the palate where expectations of apple pie filling are quickly disabused. Instead, its focused and flavorful core is amplified by delicate baking spiciness, and its bourbon barrel aging echoes softly on the long, vanilla-scented finish. Whatever it might lack in mid-palate heft it more than makes up for in its refinement. Very highly recommended. 93 points. 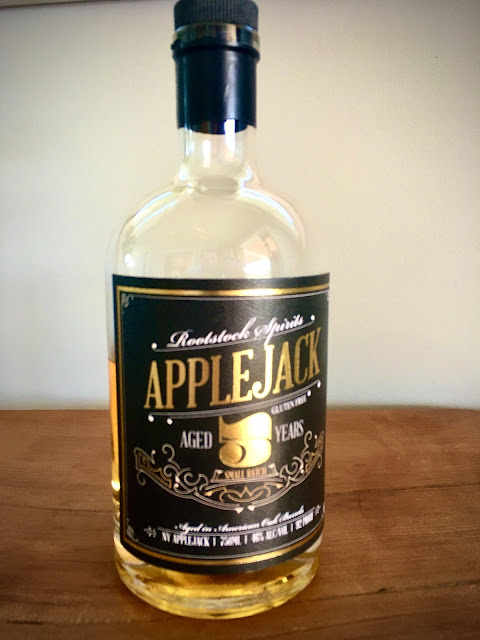